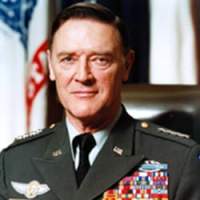 Retired Gen. Frederick Kroesen’s distinguished Army career ad many accomplishments set a standard few have achieved – or will achieve. The influence he had on me to become a better leader and person will never be forgotten. I would like to honor and highlight his life by sharing a few personal vignettes about Gen. Kroesen, the leader.

I was fortunate to be Kroesen’s last aide-de-camp on active duty. I was a major and he was commander of U.S. Army Europe and Central Army Group (CENTAG) in NATO for four years in the early 1980s during the Cold War.

Kroesen was a larger-than-life figure – a John Wayne-style hero in physique, demeanor and style. He was a man of few words, and always the gentleman. He led by example in everything he did. He was the most competent, selfless and humble general I ever knew. His integrity as impeccable, a virtue that earned the universal respect of his peers and subordinates.

As many remember, the left-wing German terrorist group known as the Baader-Meinhof Gang attempted to assassinate Kroesen in September 1981 by firing rocket-propelled anti-tank grenades and gunshots at his armor-plated sedan while he was on his way to his office in Heidelberg. His wife, Rowena Kroesen, happened to be in the car for an on-post dental appointment.

Fortunately, neither Gen. Kroesen nor Mrs. Kroesen were seriously injured. Both were taken to the hospital and treated for cuts and bruises and released to go about the day’s tasks. Gen. Kroesen later observed, ‘‘It’s not the first time the Germans shot at me and missed.’’

The General was scheduled to play his normal early morning game of doubles racquetball that day. His partner and opponents waited dutifully at the racquetball court for him to arrive. He was never late. However, when he failed to show 15 minutes after the normal starting time, everyone wondered where he was. His partner and opponents dated not leave the court until he arrived. Nearly an hour later, Kroesen arrived with a Band-Aid on the back of his neck. He said, ‘‘I’ll bet you thought I wouldn’t show up, didn’t you?’’

Not knowing what had happened, they all replied that they knew he would be there. They played the customary three games, and everyone went back to their offices. You can imagine the utter humility the racquetball players felt when they found out the commander could have been killed – and he never said a word about the assassination attempt.

I was completing a two-year assignment as an executive officer in the 385th Military Police Battalion in Stuttgart, Germany, when I was reassigned to U.S. Army Europe headquarters in Heidelberg as one of the three majors in the Secretary of General Staff (SGS) section. One of our responsibilities was to review all correspondence going to Kroesen, to ensure it was correct in all aspects. Before the correspondence arrived at the SGS office, some poor action officer drafted the document, then it was reviewed by a lieutenant colonel, a colonel and typically a brigadier general.

It then was reviewed by one of us majors, our immediate boss, a lieutenant colonel, and his boss, a colonel. This well-scrutinized document then went through one final review by the infamous ‘’admin warrant officer’’ before it was presented to Kroesen for his signature.

We had little doubt that the combined efforts of all these diligent staff officers would get it right. Surely, each document was perfect in every aspect. We were confident Kroesen would sign it instantly. Most of the time that was true, and the document was signed and sent. However, on more than one occasion, a document was returned to the SGS section with edits and notes from Kroesen.

My initial reaction was usually, ‘‘You’ve got to be kidding me!’’ This document was reviewed by way too many people, so how could any more edits be needed? In each and every case, Kroesen’s revisions brough out some essential point or broader insight that none of us had considered during this tortuous process.

Realizing these inputs always made the document better, I frequently was left to wonder why I hadn’t grasped these insights the first time around. These experiences not only sharpened my thinking, they foreshadowed another truth I eventually learned: Kroesen was a prolific, talented and succinct writer. No one was better.

He wrote many articles for ARMY Magazine over the years, relying mostly on his incredible memory and attention to detail. He wrote these articles largely out of his sense of duty to share a lifetime of accumulated experience and wisdom with other soldiers. He felt an obligation to contribute to the Army’s intellectual development well after he retired. It was part of who he was and reflected his selflessness by giving his time to the institution to which he devoted such a large portion of his life.

Some of his articles were controversial and received many letter to the editor. I once called Kroesen after reading one of his particularly provocative articles and commented that he might have set a record for the number of letters to the editor disagreeing with his position. His response was, ‘‘Gil, I don’t read replied, positive or negative. Everyone has a right to express their opinion as I had the right to publish the article.’’ Simply stated Kroesen was brilliant in the spoken and written word.

As he approached retirement from the Army in 1983, I was helping him out-process at Fort Myer, Virginia. We had just finished completing paperwork and were driving back to his quarters. He asked. ‘‘Gil, what is your next assignment after your Germany tour ends?’’ At the time, I had four months left on my overseas tour and then would return to the U.S. I told him I let my assignment officer at U.S. Total Army Personnel Command (PERSCOM, now the U.S. Army Human Resources Command) know my top choices for my next assignment. At the time, this was standard practice. Everyone hoped a career-enhancing assignment would materialize, but nothing was guaranteed.

He replied, ‘‘That’s strange.’’ I asked why. Kroesen responded in a matter-of-fact-manner, ‘‘In all my years in the Army I never contacted PERSCOM for anything. I went where they assigned me. I think I did OK.’’ How could I respond to that other than to say, ‘‘ Yes, sir, I think you did OK.’’ I quickly changed the subject.

Kroesen’s last six months of life were enormously challenging for him and his family. He spent time in and out of hospitals and rehabilitation centers. He fought in three wars (World War II, Korea, Vietnam). He was wounded numerous times. Now, in his late 90’s, he faced multiple physical challenges. One Sunday morning I was with him at a rehabilitation center in Northern Virginia. He was just finishing a physical therapy session in his room. He was exhausted, but he never quit. He did what the physical therapist told him to do without complaint. His will and determination to face those challenges were second to none.

We chatted briefly about the physical therapy session, and I asked him what his most rewarding assignment in the Army had been. He didn’t hesitate and said his most rewarding assignment was as an infantry rifle platoon leader in World War II. He mesmerized me as he recounted various firefights and names several other lieutenants and NCOs who had served with him. Even after so many years, he could describe everything in incredible detail.

He credited the NCOs for his success and told me that of all the awards he had been presented during his career, Honorary Sergeant Major of the Army was one of his most cherished. He ended up commanding that same infantry company because every other lieutenant in the unit was killed in acti