What is the American Security Council Foundation?

The American Security Council Foundation (ASCF) has helped keep the nation and the world safe since 1958 by promoting the principles of “Peace through Strength.” We have worked hand in hand with American Presidents and Congress to ensure the security of our nation and to protect the Constitution and Bill of Rights.

Our mission is to educate and engage Americans on National Security, Economic Security, and the need for Moral Leadership.

The ASCF supports activities and programs that promote our mission statement. These include our website, social media, podcasts, communism survivor series, president’s letters, position papers, a newsletter, luncheons, and seminars to disseminate our mission statement. Every Tuesday, we highlight America’s positive actions through “Spotlight on America.”

The ASCF is in the process of creating an online voter index, re-establishing a Congressional Advisory Board, and renewing the Coalition of Peace through Strength.

To do this we need your help.

As a 501(c)(3) organization, your financial contributions to our on-going mission are tax deductible.

History of the ASCF 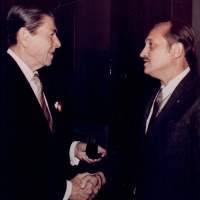 Throughout the last decade, the ASCF has had a profound impact on foreign policy and national security. ASCF initiated and led the bi-partisan “Coalition of Peace through Strength,” of which President Reagan was an active member. Reagan adopted this winning policy, which, along with the Coalition’s influence in Congress, helped end the cold war and the demise of the Soviet Union.

The ASCF and the Coalition for Peace through Strength went on to advocate successfully for energy independence with the support of Congress.

For the last eight years, ASCF has conceived and nurtured the Step-Up America Foundation (SUAF) to educate young Americans on our history and values through the Franklin Project. In January of 2020, SUAF became its own non-profit. Visit stepupamericaprogram.org

The ASCF has done and continues to do important work to ensure that we remain the greatest country on earth. Future generations depend on those of us that have experienced the challenges to world peace and direct threats of our country. Our desire is for our activities and programs to inspire a love for the United States and its freedoms.

Our freedoms and strengths make us a target toward authoritarian regimes that suppress their people. If Americans do not understand the value of good citizenship and patriotism by being taught the foundations of our country then the United States is in jeopardy of unraveling. The desired outcome of the ASCF is to protect American freedoms and promote democracy over authoritarianism.

From inception; the Foundation has produced at least one journal on a quarterly basis. It started as the Washington Report and changed names over the years. At one point, the Foundation produced two journals, The National Security Report. These types of journals were written and produced by retired and former military officials, State Department officers, and scholars in their respective areas.

During the 1950’s and 60’s these articles were considered well targeted and researched opinions and statements. They were reproduced in local papers and private industries’ publications as well as inserted in the Congressional Record. President Kennedy used the thesis of the article “Declaration of Contraband” to draft policy during the Cuba Missile Crisis in 1962. President Ronald Reagan was a subscriber and usually read issues from front to back.

Every issue was published and sent to Congress, military officials, business executives, and the average citizens to map out the path to “Peace Through Strength,” Senators and Congressmen from both sides of the aisle read the copies sent to their offices, many joined the Foundation and supported legislation crafted at the Foundation. The mandate was to make America a leader in military preparedness, moral leadership abroad (foreign policy), and economic development. Drawing from the capitalistic values of the American way of life and strong moral fiber of the American people, the journal aimed to educate the country on the real threat of Communism and explained how to achieve victory.

In classrooms around America, teachers used the articles as readers in an attempt to teach reading and history, and to explain to children why they must learn Air Raid Drills. With the fear of nuclear holocaust lurking around every corner, the American people need a way to become involved and do their part. Supporting better funding for our military, keeping our economy strong, and committing everyone to understand the grave dangers we faced engaged the nation, in a similar way that WW II did.

A lot has changed since the Cold War era, but the one thing that remains is that “Peace Through Strength” works. In a time where U.S. Military troops are fighting overseas, and over a decade after the tragic attacks of September 11, 2001, the looming threat of terrorism still very real, America needs to be vigilant. Democracy and freedom need to be defended with the best information, well thought arguments, and open debate that The American Security Council Foundation provides.