Alan W. Dowd is a Senior Fellow with the American Security Council Foundation, where he writes on the full range of topics relating to national defense, foreign policy and international security. Dowd’s commentaries and essays have appeared in Policy Review, Parameters, Military Officer, The American Legion Magazine, The Journal of Diplomacy and International Relations, The Claremont Review of Books, World Politics Review, The Wall Street Journal Europe, The Jerusalem Post, The Financial Times Deutschland, The Washington Times, The Baltimore Sun, The Washington Examiner, The Detroit News, The Sacramento Bee, The Vancouver Sun, The National Post, The Landing Zone, Current, The World & I, The American Enterprise, Fraser Forum, American Outlook, The American and the online editions of Weekly Standard, National Review and American Interest. Beyond his work in opinion journalism, Dowd has served as an adjunct professor and university lecturer; congressional aide; and administrator, researcher and writer at leading think tanks, including the Hudson Institute, Sagamore Institute and Fraser Institute. An award-winning writer, Dowd has been interviewed by Fox News Channel, Cox News Service, The Washington Times, The National Post, the Australian Broadcasting Corporation and numerous radio programs across North America. In addition, his work has been quoted by and/or reprinted in The Guardian, CBS News, BBC News and the Council on Foreign Relations. Dowd holds degrees from Butler University and Indiana University. Follow him at twitter.com/alanwdowd.

Scott Tilley is a Senior Fellow at the American Security Council Foundation, where he writes the “Technical Power” column, focusing on the societal and national security implications of advanced technology in cybersecurity, space, and foreign relations.

He is an emeritus professor at the Florida Institute of Technology. Previously, he was with the University of California, Riverside, Carnegie Mellon University’s Software Engineering Institute, and IBM. His research and teaching were in the areas of computer science, software & systems engineering, educational technology, the design of communication, and business information systems.

He has authored over 150 academic papers and has published 28 books (technical and non-technical), most recently Systems Analysis & Design (Cengage, 2020), SPACE (Anthology Alliance, 2019), and Technical Justice (CTS Press, 2019). He wrote the “Technology Today” column for FLORIDA TODAY from 2010 to 2018.

He holds a Ph.D. in computer science from the University of Victoria (1995).

An in-depth look at China's footprint in the Bahamas. 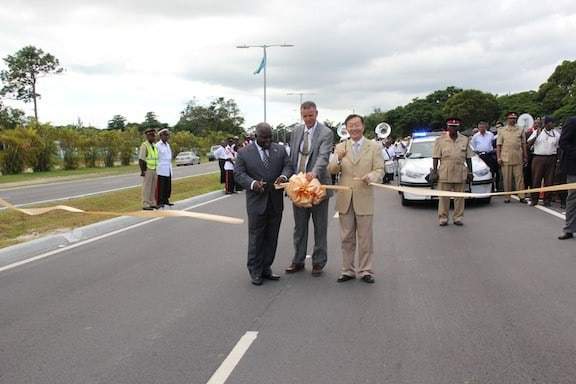 This paper will look at the timeline of Chinese infrastructure projects in comparison with Bahamian political parties and their policies.  The article will explore China's economic and political coercion through a "gifted" sports stadium followed by loans for questionable infrastructure programs.  It will question the need for the North Abaco port as well as the Nassau Gateway Airport project.  The paper will conclude with a short analysis of China's three-fold agenda for the Bahamas.

Timeline of crucial Chinese infrastructure projects in the Bahamas:

1953 – Progressive Liberal Party (PLP) was formed, the first political Party of Bahamian's from African descent.  The PLP was formed in opposition to the ruling British.

1955 – Hawksbill Creek Agreement (HCA) was signed between the Bahamian government and the Grand Bahama Port Authority (consisting of wealthy American and British investors).

1972 – The Freedom National Movement party was formed to oppose the PLP.  Some of the FNM members were those from the UBP party and anti-PLP members.

1973 – The Commonwealth of the Bahamas won their Independence from Great Britain.

NOTE: Before 1997 the Bahamas had diplomatic relations with Taiwan, but then switched to Beijing.

2007 – FMN party regained control of the government under Ingraham once again.

2011 – The $30 million Thomas Robinson Stadium was completed and given as a "gift" to the Bahamas.

2011 – China's EXIM bank provided a $2.45 billion loan for Baha Mar resort, the largest in the Caribbean.

2012 – Progressive Liberal Party in the Bahamas gained the power of the government.